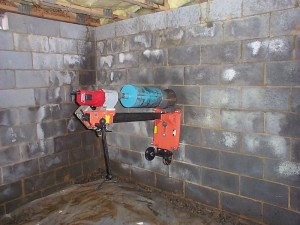 Home improvement has come a long way over the last several decades, and this is true for every aspect of our homes. From roofing to insulation to basements, the tools and upgrades available are drastically different than they were for our parents. Older block foundations are particularly inferior to their newer counterparts. They have a tendency to bow in, crack, or even fail completely.

Soil is constantly pressing against the walls of our basements, and that’s what’s causing the severe kinds of damages listed above. The problem lies with the weak structural integrity that these older block foundations have. They weren’t designed with any kind of additional structural support in mind. While they do put up a good fight with the soil for the start of their life cycles, they don’t often fare well as time goes on, especially in some areas where the soil likes to contract and expand. That leaves you on the hook for hundreds or even thousands of dollars in foundation repair.

The Process of Basement Wall Stabilization

The first step of this particular foundation repair is to simply assess the damage. Every block foundation wall is different, and the damage could come in many degrees of severity. In the most extreme cases, the wall can have wide cracks running through it and be on the brink of collapse. After examining the walls, they are dug out and replaced. Once the new, straight walls are in place, reinforcements are added to ensure their stability for years to come.

The reinforcement material of choice is carbon fiber. Workers glue strips of it directly to the basement walls with a few feet of spacing between each one. Along the whole length of the wall, black strips of this strong composite material will run top to bottom. It doesn’t seem like much to the eye, but it works. Carbon fiber is an incredibly strong material. In fact, it’s used as an integral part of most airplanes. So when the pressure of the soil causes the block walls to bow, they can’t because the carbon fiber won’t give in. If it can withstand the stresses of air travel, it can easily handle a little soil pushing against it.

However, there is a drawback to this approach to basement wall stabilization. Carbon fiber can leave a hole in your wallet, and that’s before you add in the cost of labor. That can give some homeowners hesitation, but if your house needs foundation repair, then it has to be done. You can’t just let your foundation walls collapse – that only makes the costs much, much worse.